Understanding the Physics Behind Resonance Testing

NDT-RAM (Non-Destructive Testing Resonant Acoustic Method) is a unique form of Resonant Ultrasound Spectroscopy (RUS), also popularly known as Resonant Inspection (RI). The ASTM standard E-2001 (Resonant Ultrasound Spectroscopy for Defect Detection in Both Metallic and Non-Metallic Parts) addresses the NDT-RAM concept.  NDT-RAM provides a whole body component inspection sensitive to both internal and external flaws. NDT-RAM can detect imperfections such as variances in overall shape, weight and density of parts. It can also detect if processes such as machining or heat treating have been missed. Below are typical flaws of powdered metal, cast, forged, welded, stamped and brazed parts that can be detected with NDT-RAM.

Every part has a unique vibration signature (its resonant frequency). This resonance is almost exactly the same from good part to good part. The resonance will shift when there is an internal or external change or imperfection. For example, when a bell has a crack, it does not have a clear ring and loses its ability to hold its tone.  The same is true of a part that has a flaw. 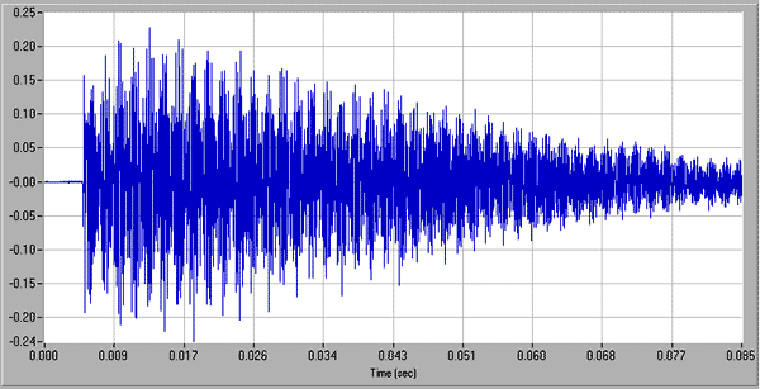 Using the Fast Fourier Transform (FFT) process, the response signal is separated into discrete frequencies. This allows for easy interpretation of data in the frequency domain. Peaks represent a specific component's resonant frequency. 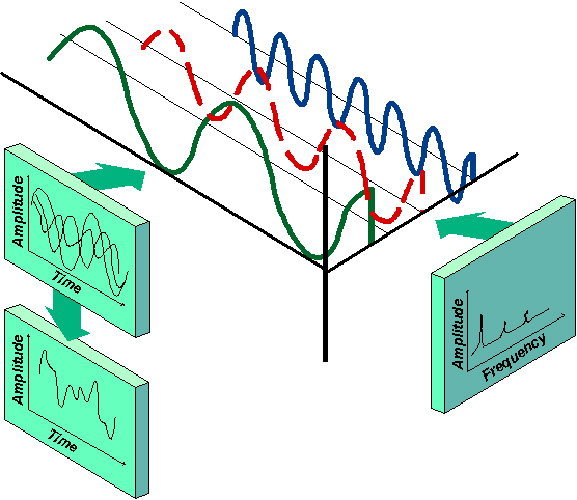 The result is a Response Frequency Spectrum that is unique to a specific part. The principal mechanical properties of an object are:

If the Mass, Stiffness or Damping in a component are varied, the dynamic response characteristics of an impact will vary. Using this spectrum, we can look for changes in parts. Below is an example of the resonant signature for both a good and defective part. 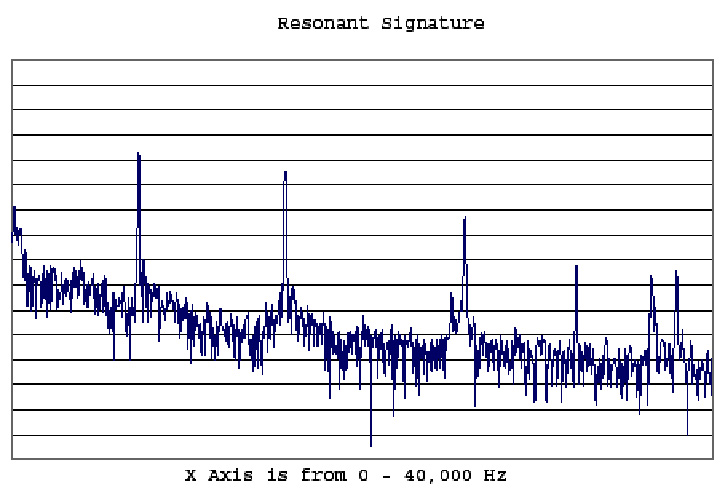 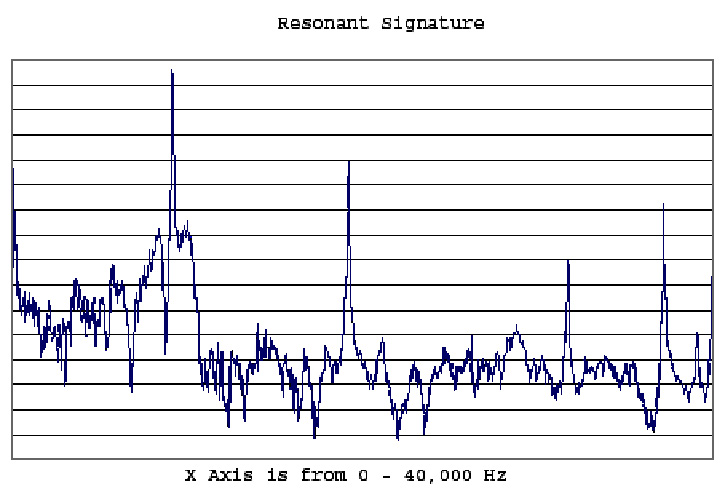 Focusing on a Specific Peak

By examining peaks at a closer range, variances in the frequency response are easier to see. Below is an example of a typical frequency shift. This shift is typical from 50-500 Hz. The green block represents the Pass/Fail criterion (or limit). If the peak is inside the block, the part passes and is ready for the next process 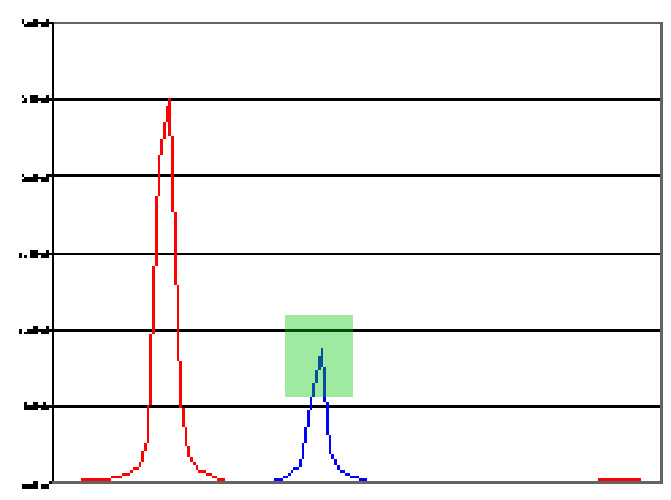 This is an example of the absence of or the significant difference in the amplitude of a peak. The defect caused the part to dampen faster and not hold its tone.

Once the Pass/Fail criteria have been set for a given part, the NDT-RAM application can be brought online. Testing can occur as quickly as one part per second and the system can be entirely automated, allowing for 100% inspection of your high volume production line parts. 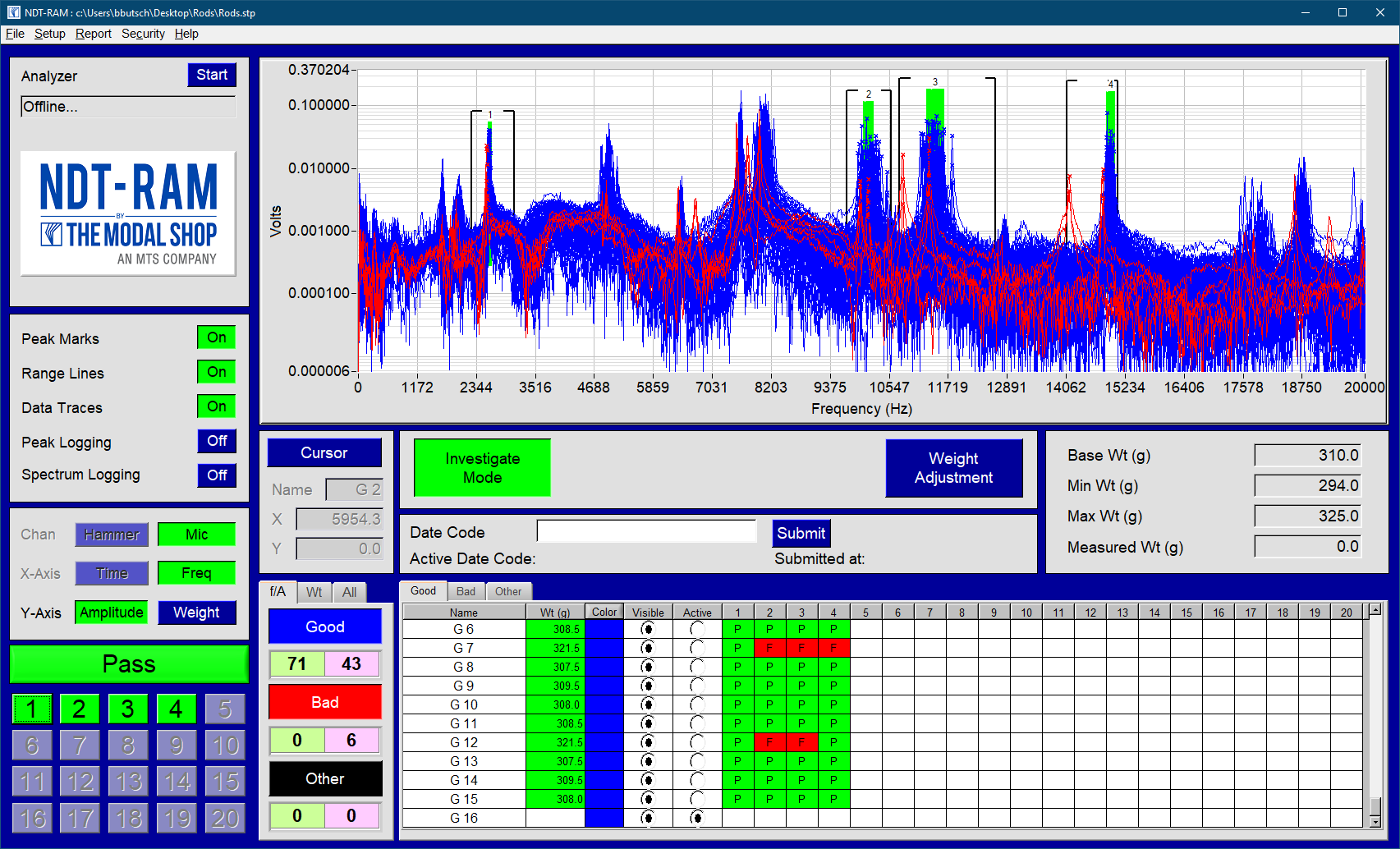 A record of every tested part is automatically stored in report form. This allows the ability to perform statistical analysis on lots, shifts, percent and types of defects.

Sometimes it is necessary to have more than one Pass/Fail criterion. Below is an example of a part that requires four points be checked to determine a good part from a defective part. In this test, all four points must be good for the part to pass.

Will RAM Work for My Parts?

Which System Is Right for Me?