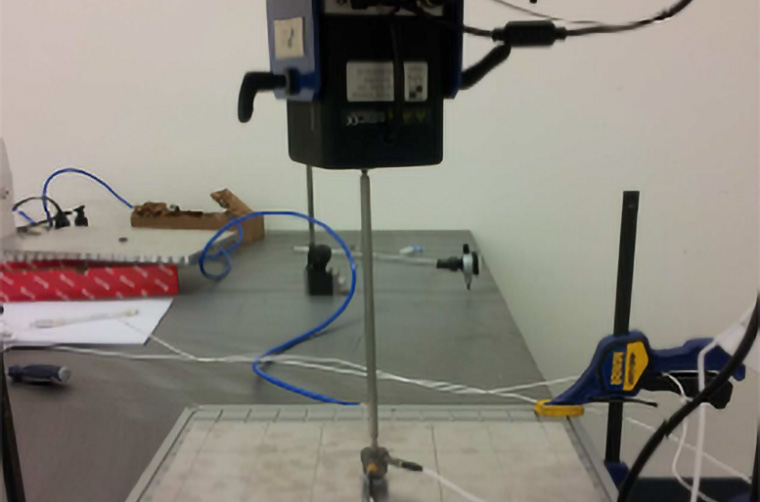 The assumption that a real system can be modeled as a single degree-of-freedom system requires proper fixture design for the composite panel used for testing and the other test apparatuses. By using a vacuum fixture, the composite panel can be held on to a large steel table without any clamps or supporting equipment around the edges of the panel. The heavy table minimizes away outside vibrations in the testing. This effectively turns the composite panel into a top sheet over a supporting elastic foundation. By using the proper fixture design, any damage in the panel will appear as a non-linear behavior when the panel is excited in an out of plane direction.

A disbonded top-sheet is chosen as the damage mechanism for testing. The mode of shape of the primary resonance of the disbonded area is identified by measuring frequency response functions over a grid on the panel using modal impact testing. A testing regimen was then established that examines the response of the damaged section of the panel when excited at different forcing amplitudes at three different frequencies using a SmartShakerTM  Model 2007E01 mounted to a Lateral Excitation Stand Model 2050 through an impedance head mounted to the metal skin of metal sandwich composite panel (see Figure 1).

As the top sheet rises off the elastic foundation, it exhibits one value of stiffness. As the sheet then returns and presses into the elastic material, a new stiffness is seen in the system. This bilinearity can then be modeled as a quadratic stiffness in the single degree-of-freedom model. The cubic damping comes from the behavior of the adhesives at the edges of the disbonded area. As the disbonded face
sheet comes away from the elastic foundation, the adhesives that bond the rest of the panel see high strain rates, which causes the cubic, or symmetrical, non-linearity.