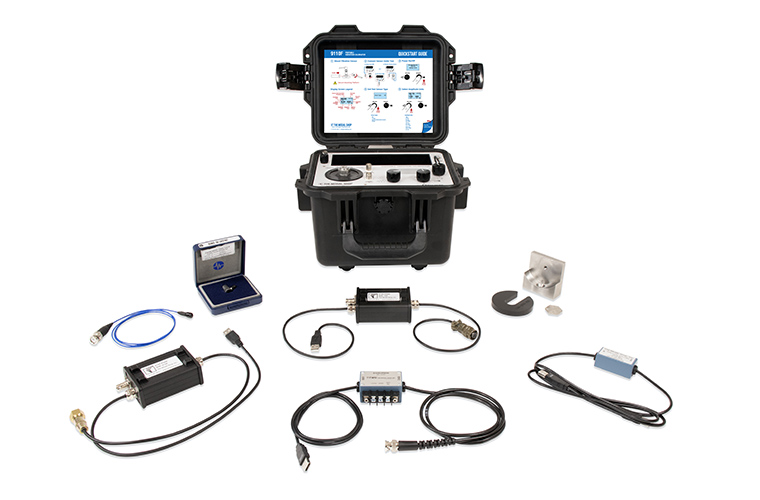 When an aircraft must be grounded due to measured engine vibration issues, it is costly and time consuming for everyone involved. Many times, bad velocimeters are the first suspect. Vibration sensors that have sustained physical damage can provide inaccurate measurements. This issue is so common that suspect velocimeters are often immediately replaced as soon as a vibration issue is detected, and the aircraft is sent out for a test flight.  Of course, the disadvantage to this approach is that it is a time-consuming and expensive method of determining if the velocimeters were really the problem.

There is an easier, less expensive, and safer way to determine if the sensors were actually the cause of the vibration alarm. A sensor can quickly and easily be tested in the field with The Modal Shop’s Portable Vibration Calibrator and CALROUTE. Because of the portable and rugged nature of the Portable Vibration Calibrator and the ease of testing with CALROUTE, performing an ISO 16063-21 compliant velocimeter field test is straightforward and can be accomplished anywhere.

See The Modal Shop's video below, demonstrating how to verify a Honeywell (Chadwick-Helmuth) 7310 or 8866-1 Velocimeter using the PVC with a preprogrammed CALROUTE.

As you can see, this process allows a technician to see a simple pass/fail notification for each pre-set testing point. The 9110D generates accurate sinusoidal vibration at speeds as low as 5 Hz, allowing for application critical frequencies to be tested. This can immediately either confirm that the velocimeters were indeed bad or allow the team to get right to work troubleshooting the issue, avoiding an unnecessary and costly test flight.

Each portable vibration calibrator is supplied with a calibration certificate stating its accuracy at test points throughout its range. The device is calibrated against a reference accelerometer that has been tested on a laser primary accelerometer calibration station. Laser primary calibration is the most accurate method by which to test a piezoelectric accelerometer. The Modal Shop’s calibration results and uncertainty budget have been accredited to the ISO 17025 standard by the American Association of Laboratory Accreditation (A2LA).

Setting up the CALROUTE test is also straightforward, thanks to the Report Generation Workbook provided with every Portable Vibration Calibrator. The video below gives step-by-step instructions on how to set up the semi-automated test demonstrated above.