Vibration calibration methodologies are defined in various sections of ISO 16063. Within this standard, the measurement of accelerometer frequency response calibration can be performed using either primary or secondary means, as stated by ISO 16063 Part 11 (1999) and Part 21 (2003) respectively. Primary accelerometer calibration utilizes a laser interferometer as reference. Secondary calibration techniques use a transfer standard, typically another accelerometer, to calibrate the accelerometer under test and provide traceability to a primary standard.

These transfer standards are generally available in two different package designs. The first, and most common, is a double-ended accelerometer, often called a “piggy-back” reference accelerometer (Figure 1). It is designed specifically to carry another Sensor Under Test (SUT) to perform this secondary transfer calibration. These types of reference accelerometers are threaded on both the top and bottom sides of the unit, so that the base of the double sided transfer standard can mount directly onto a shaker and a SUT can mount directly to its top. The top surface of these piggy-back accelerometers is the calibrated mating surface, preferably calibrated directly against a laser interferometer to provide traceability with the best measurement uncertainty. The bottom portion of the double-ended reference accelerometer design is solid, providing a relatively large, massive base for the unit when mounted properly. It should never be mounted “upside-down” as this mounting configuration has dramatically different boundary conditions compared to “upside-up” mounting as the unit itself is calibrated. The net result is significant frequency response calibration errors in the mid-to-high frequency range, shown below for one of the more common double-ended reference accelerometers commercially available. 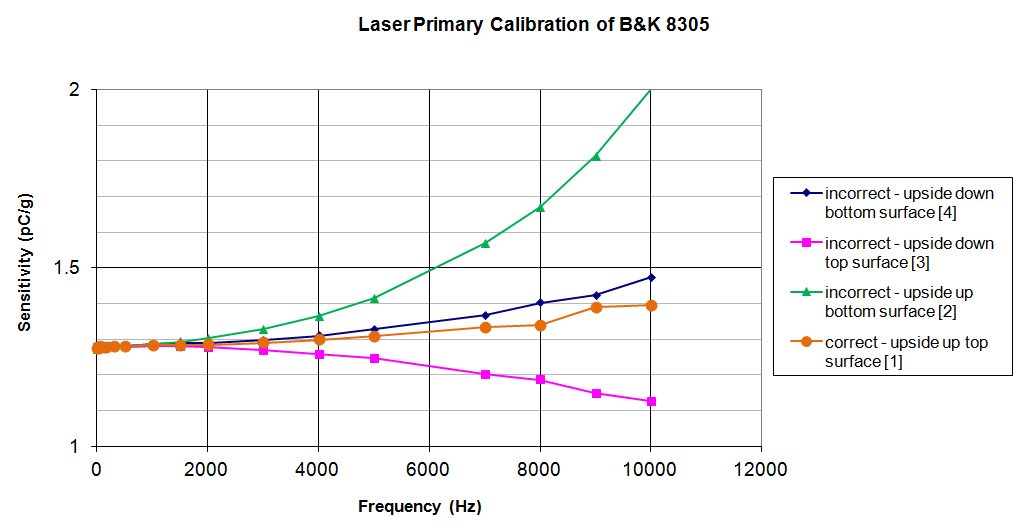