Dynamic pressure sensors are typically calibrated by varying the amplitude, rather than the frequency, of the physical input. It so happens that the physics of building a controlled actuator that covers the dynamic range of piezoelectric and piezoresistive pressure sensors is, in a word, challenging.  As a result, multiple dynamic pressure calibration techniques have been developed, which is the subject of this month's article.

Of the many pressure sensor designs available, two stand out for their excellence in measuring dynamic, rather than static, pressure. Piezoelectric pressure sensors excel at high frequencies and pressure levels and are inherently rugged for the most demanding environments. Condenser microphones offer unparalleled sensitivity for acoustic measurements. Since these two designs are uniquely suited for dynamic measurements, the best calibration techniques for them require a dynamic, rather than static, input.

Dynamic calibration inputs are classified as periodic (steady state and repeating) or aperiodic (transient).  The dynamic calibration input (periodic or aperiodic) should be chosen such that it calibrates the sensor in a way that is similar to the sensor’s field application.  Of course, physical limitations may also apply, but in general, periodic signals are used to calibrate high-sensitivity acoustic microphones, and aperiodic techniques are used to calibrate low-sensitivity pressure sensors. For the purposes of this article, we will discuss aperiodic techniques.

Figure 1, Calculating the sensor sensitivity for the 'step' calibration input. 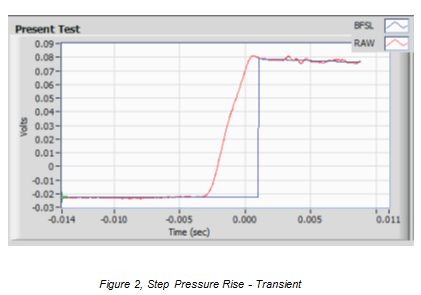 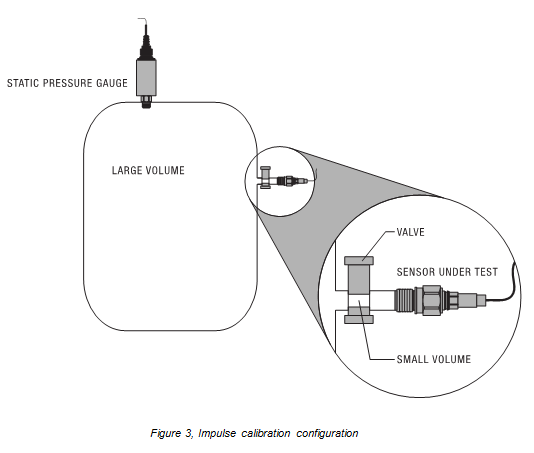 Impulse inputs provide a quick rise and fall of the pressure level.  A sensor under test and a reference sensor are mounted very closely in a closed volume of oil.  A third port on the volume is occupied by a piston.  The piston is struck on the outside of the volume, which applies a force to the oil creating a pressure impulse that is simultaneously observed and measured by the two sensors. 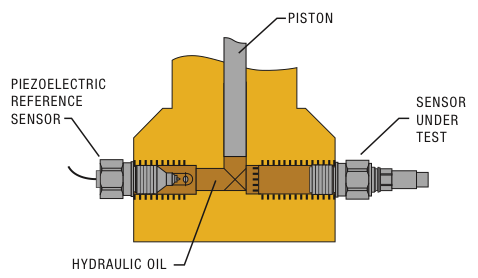 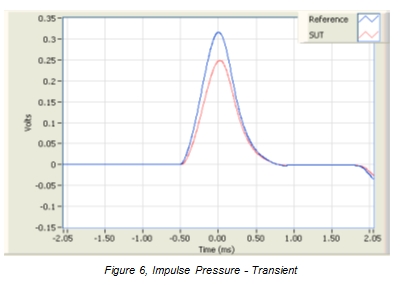