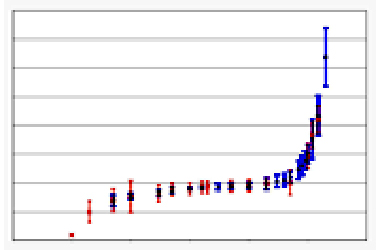 As we discussed in the previous article, there are two types of calibration uncertainties, random and systemic. Since a calibration lab is responsible for correctly reporting their uncertainty, it is important to understand the differences between these types of contributors and how each can be considered.

As a framework to differentiate the two types, consider that uncertainties caused by random contributors lend themselves to be determined by statistical measurement methods whereas, uncertainties that are systemic in nature need to be surveyed versus more accurate methods. As an example, in accelerometer calibration the uncertainty of the reference sensor is always a significant contributor as it is often the largest single contributor to overall uncertainty of a system. It consists of both random and systemic components. The significant components (in order of importance) are uncertainty of traceable reference calibration, drift and noise.

The uncertainty of the traceable reference calibration (via traditional piggyback or reference standard) is a systemic contributor and leads the pareto principle, making up around 80% of the total system uncertainty. It is termed systemic since there is a sensitivity value provided by a calibration lab that is different from the sensor's true value, and with the exception of drift, neither of these values change. A significant reduction in this contributor can be made at an incremental expense by using a more accurate calibration method such as by laser interferometer.

While drift of the reference accelerometer is systemic in nature, it is typically characterized by adding a random component. The long term drift can be determined experimentally by analyzing the long-term calibration trend of the accelerometer to validate the experience of the manufacturer and the material of the sensing element specification of a "worst case" drift for the element. Quartz, for example, is known to have less than a 0.05% drift per year making it the best choice for reference accelerometers.  Within the environmental control range of the calibration laboratory, any remaining temperature (or other environmental influence) is treated as random and is captured via statistical sampling test methods.  Truly random contributors, like operator mounting and cabling forces are also bundled into the statistical sampling tests.

Noise of the reference is the smallest contributor and is very random in nature. Because it is not affected by realistic environmental conditions in calibration labs, the contribution can be determined by making multiple measurements while the sensor is isolated and at rest.

In conclusion, it is advisable for labs that have determined their uncertainty to check their results against other laboratories and systems that have done similar studies. The process has a number of names including inter-laboratory comparison, proficiency testing, round robin, etc. In this type of test, a stable accelerometer is circulated and calibrated by various labs to be compared and see that the labs match to within their stated uncertainties.  We invite you to call us if this type of test is of interest to you.