Often, when we talk about accelerometer calibration we are referring essentially to the measurement of sensor sensitivity as a function of frequency. The manufacturer of an accelerometer subjects the design to a wide variety of tests to determine output due to a large number of inputs.

Temperature influence can be a critical factor when it comes to applications where the accelerometer will be used in a low- or high-temperature environment or in a climate chamber where a test article will be submitted to vibration and temperature cycling at the same time. Therefore, it is very important to always check with the sensor manufacturer what the expected temperature response of the sensor is. In general piezoelectric sensors with a quartz-sensing element have a very low sensitivity deviation as a function of temperature. As an example the curve below shows a typical curve for a general purpose 10mV/g quartz accelerometer: 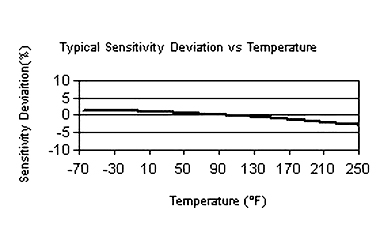 The fluctuation is well within +/- 5% that has to do with quartz being naturally piezoelectric.  As such, it exhibits the best long-term stability of any piezoelectric sensing material. Quartz exhibits no pyro-electric output and has a small stable thermal coefficient.

A similarly designed piezoelectric accelerometer with ceramic elements instead, typically presents a more prominent sensitivity fluctuation as you can see below: 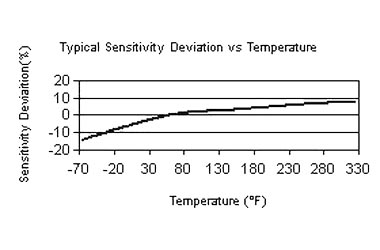 The sensing element is just one variable that will influence the temperature characteristics of the sensor. By manipulating the sensing element, sensing geometry, internal electronics and other design aspects of the sensor, manufacturers of accelerometers are capable of controlling the deviation to a point below 1% with temperature coefficient as low as 0.005%/°F (0.009%/°C), making it an ideal choice for temperature-critical applications such as powertrain measurements. 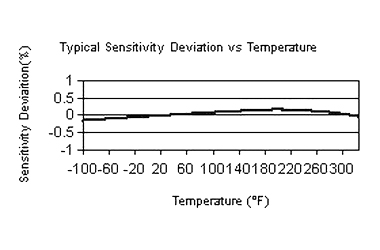